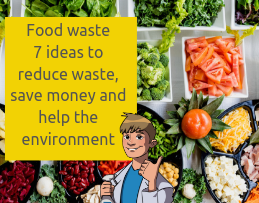 As a Mum and a regular frequenter of the supermarkets, I understand that 'getting the messages' (going for the weekly food shop) can be a time consuming and sometimes costly chore. Knowing what is already in the house, what is in the freezer, remembering who eats what, not to mention the meal ideas - it's a tough gig!  Sometimes it can end up with me buying the wrong thing or doubling up on food I already have in the house.

I try to be as organised as I can be with food shopping and meals but things don’t always go as planned, do they?

The list goes on and it doesn’t just apply to Mum’s either; there are so many household around the country where food gets wasted and ends up being thrown in the bucket.

In this article we are going to cover the different elements of food wastage from producers all the way down the line to customers, and also give you some ideas to help you and your family reduce the amount of food you throw out each week.

How much food is wasted in Scotland?

In Scotland alone, 2 million tonnes of fresh fruit and vegetable are lost or wasted in the supply chain; add to this the 380,000 tonnes discarded by households and this costs the Scottish public over £4 billion every year.

On average that equates to £470 per household with the food wasted each year.   And it doesn’t stop in Scotland and the UK.  Across the world a third of the food supply is wasted; we are chopping down forests to grow more food, yet 1 billion people are still going hungry. That doesn’t seem right, does it?

How is food wasted before it gets to the supermarket?

In the supply chain there are several elements that go towards fresh fruit and vegetable damage, and ultimately spoilage:

When fruit and vegetables are damaged, the site of the damage is a breeding ground for bacteria.

Traditionally fruit and vegetables have been cleaned with Chlorine to rid the produce of bacteria and pathogens.  Producers and governments are realising the damaging potential of Chlorine and are looking for alternatives, or in some cases, choosing to use nothing at all.

Producers - how can the life of fruit and vegetables be extended without harmful chemicals?

What is wonky veg?

Not only are there the logistical elements of the supply chain that have an effect on food wastage, there is the consumers demand for perfection.  Producers are under pressure to make sure that each bit of fruit or veg ‘looks good’.  If a carrot is not aesthetically pleasing some of us would not buy it – crazy right?

‘Wonky fruit and vegetables’ have been around for a few years now.  Supermarkets were urged to sell wonky vegetables in a bid to reduce food waste.  The fact that a carrot has a bend in it, or a parsnip has nobbles has no effect whatsoever on the taste of the produce and certainly doesn’t pose a threat to anyone eating it.

The quest for perfection by consumers has led to the huge increase in fruit and vegetables’ being discarded before they even reaches the stores.

How can I reduce food waste?

The majority of us are powerless when it comes to what goes on in the supply chain, but there are things you can implement at home to reduce your own family’s amount of food wastage:

Before you shop - Look in your kitchen cupboards, fridge and freezer before each shopping trip. You can reduce waste by knowing what you already have to use up.

Make your shopping list - Make a shopping list, take it to the shops and stick to it. A list will help you to avoid impulse buying or stocking up on more food than you’ll use

Fridge and freezer - See what’s in your fridge and freezer that needs to be used up before you head to the shops. Label and date the homemade food and leftovers you freeze to enjoy it at its best.

Meal planning - Write a meal plan for the week so you buy only what you need. Looking ahead can help you make the most of leftovers and save you time and money.

Freezer week – Have a good look in your freezer, pull stuff out and defrost.   Aim to use what you already have without buying additional food for a week – it could result in some interesting concoctions!

Reduce portion sizes – Make sure that your plates are not over filled.  Food that is left on the plate will end up in the bin.  If you have food left over people can always have seconds. Or, the remaining food can be kept for another meal

If the thought of wasting food, and effectively hard earned cash, is not enough to make you sit up and take notice, think about these facts:

Fresh fruit – We throw away £70 million-worth of fresh fruit every year. That’s equivalent to an apple a day for every schoolchild and teacher in Scotland for 18 months.

Fresh vegetables – We waste 62,000 tonnes of vegetables every year.  That’s an average of 26kg a year for every household in Scotland - the equivalent of a whole weekly shop.

Drink - Scottish households throw away an estimated 70 million litres of drinks every year.  That would fill 175,000 bathtubs, right to the brim.

Meat and fish – Scotland’s households throw away £130 million-worth of meat and fish waste every year. It’s enough to make every person in Scotland a bacon butty every Saturday for the next year!

Bakery – Every day in Scotland we throw away the equivalent of 2.6 million slices of bread.

Dairy – Every year, Scotland’s households throw away £93 million-worth of dairy waste. That's enough for everyone in Scotland to have milk on their cereal for the next six months.

How does food wastage affect the environment?

It has been reported that “animal agriculture is the leading cause of deforestation, water consumption and pollution, is responsible for more greenhouse gases than the transportation industry, and is a primary driver of rainforest destruction, species extinction, habitat loss, topsoil erosion, ocean “dead zones,” and virtually every other environmental ill. Yet it goes on, almost entirely unchallenged" – Cowspiracy

Methane’s impact is 34 times greater than CO2 with the majority of its production coming from gas processing and livestock.

It is not only the animals that are to blame for the methane pollution.  When food is thrown into landfill it started to decompose.  The decomposition of food waste releases methane into the air

Methane accounts for about twenty percent of greenhouse gas emissions

Related content: What is sustainable agriculture and why is it important?

The production of fresh fruit and vegetable along with meat and fish requires a substantial amount of water.  Agriculture requires water to hydrate crops whilst animals that are being reared for consumption, need even more.  And think about the grasses and grains that the animals eat, this needs water to grow too.

Fuel is needed in the production of food in several different areas:

Throwing out food means that the fuel used in its initial production has been wasted; this is costly not only to the pocket and the economy but the environment too.

In years gone by, when a wild animal needed to eat it would hunt its prey.  Food waste means that these animals are turning to the food we throw away, which can be rotten or decayed.  This brings with it, illness and sometimes death for the animal which depletes their numbers and knocks the natural ‘predator –vs- prey’ out of whack.

Food waste that is dumped in the oceans attracts more birds.  These birds feed on the waste but at the same time are eating different species of fish, this has an effect on the natural balance of the ecosystem.

On the face of it, reducing the amount of food that is wasted will save you money but as you can see, it goes deeper than that.  Food waste has a ripple effect from the supply chain right through to the fish in the sea.  When you see the bigger picture it makes it more apparent how food wastage needs to be drastically reduced by each and every one of us, more so producers.

If the amount of food wasted around the world were reduced by just 25% there would be enough food to feed all the people who are malnourished, according to the UN.

Ultimately it take a little bit of forward planning to make sure you are not buying food that is not necessary or perishables that will not be used.

As individuals we can make changes in our day to day life to reduce the negative impacts we have on the planet. It also takes for the larger bodies to make changes to the supply chain processes, right the current wrongs.

Knowing what you know now, do you think you and your family would be able to implement some changes to reduce food waste?

Making changes in the products we use, the food we eat and how we stay healthy and active can seem like a daunting task.

Where do you start?

Where do you find the time?

Maybe you have you made some changes but don’t know what else you can do?

Mum, wife, In-house marketer at the Bridge Group and lover of the burpee :)
Related Articles
Organic farming – can post-harvest fruit and veg be cleaned without chemicals?
Soil solarisation – can I sterilise my garden soil without using Jeyes Fluid